There are several types of whales in Cabo San Lucas during the winter, but there’s one species you can actually swim with: whale sharks. While they’re not technically whales, they don’t pose any danger to humans, and they’re bright white spots make them absolutely mesmerizing. Like whales, these sharks are migratory creatures, traveling thousands of miles every year, and while you can often find some of the coast of Mexico, the best time to see whale sharks in Cabo San Lucas is in the winter. If swimming with whale sharks is on your bucket list, let this guide help you fulfill your dreams.

On Cabo San Lucas whale shark tours, you’ll see several of these school-bus sized fish swimming slowly through the water, their mouths acting as filter feeders for small fish and plankton. They move slowly, around three miles per hour, and they don’t chase after larger prey. These gentle giants are technically sharks, so their name refers to how big they can grow: up to 40 feet. While they’re not one of the types of whales in Cabo San Lucas you typically think of, they’re just as awe-inspiring and majestic, giving us a renewed respect for the power of the ocean. 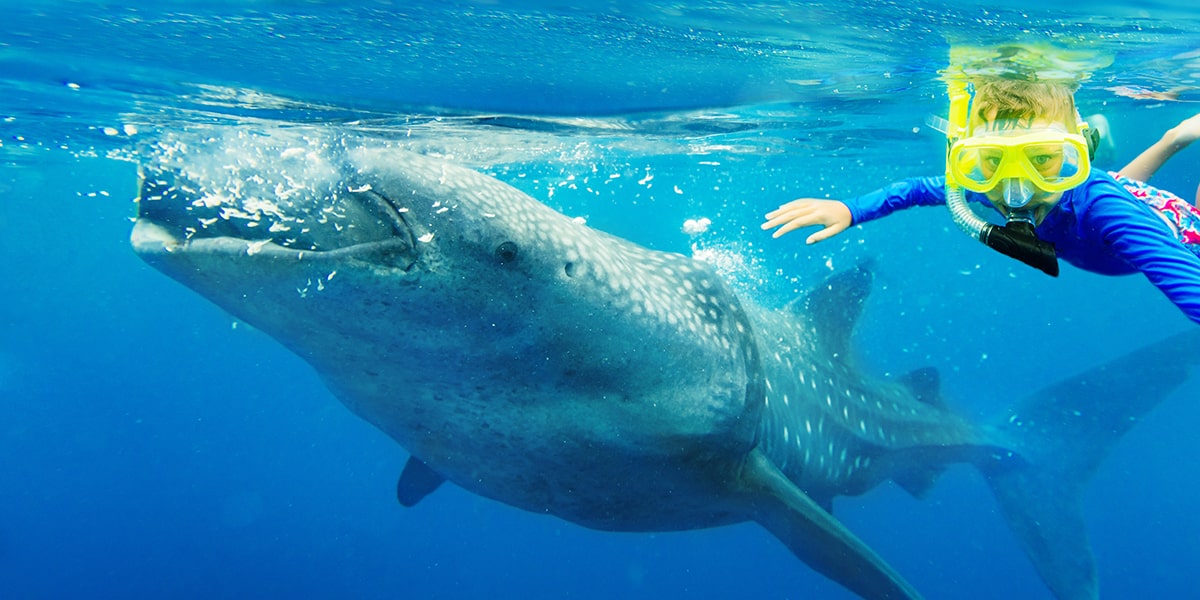 Regular divers can spot an occasional whale shark throughout the year off the coast of Cabo, but if swimming with whale sharks appeals to you, make sure to travel during whale shark season in Cabo. While they typically start to arrive in October, the best time to see whale sharks in Cabo San Lucas begins in November. This is also when the two main types of whales in Cabo San Lucas can be spotted: humpback and gray whales. Take a full exploration of the sea by swimming with these sharks and sailing out to spot the true whales breaching the surface of the sea. All of these creatures will begin their return migration in March, making that your last chance to see them.

Most Cabo San Lucas whale shark tours take guests up the coast to a more secluded feeding area near La Paz. During the drive, you’ll get to see the rugged beauty of the landscape before you hop on the boat. When it’s time to start swimming with whale sharks, you’ll jump into the water with a snorkel to watch these slow-moving giants glide around you, and with life jackets provided by the tour company, even younger children can enjoy this activity. As you browse different tour options, you’ll see that most include some sort of lunch and light snack, and you’ll also notice that they only operate during whale shark season in Cabo, between November and March.

Because the best time to see whale sharks in Cabo San Lucas is only during the winter, swimming alongside them is an even more thrilling adventure, and if you’re taking a winter vacation, it’s an adrenaline pumping opportunity you won’t want to miss. Because it also aligns with whale watching season, you’ll have all sorts of chances to discover the secrets of the sea.